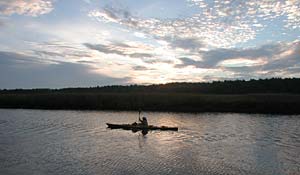 Note by Pat Traynor:
A few of us paddled from the Hanover launch down to camp at Couch Beach and continued the next day [trip report]. Jim Fitzgerald had previous commitments and was unable to spend the night with us. He paddled with us to Couch beach and then back to Hanover that night. This is his story of the return trip.

Okay, so I leave you guys in the midst of a spectacular sunset. Really, you guys ought to have come along for a while. I've never been on the river when it was so beautiful. The moon made the river a ribbon of silver. Current gently pulling me along. Birds flying overhead in the darkening sky. Wind just a slight warm breeze. Peaceful, soothing, just lovely. Until the Washington Street bridge.

Then all hell broke loose. How can the rapids be flowing against me when the tide is coming in? And where did all those damn rocks come from? My guess would be the current coming down the river actually is faster than the flood until some time at mid tide. I had to fight like crazy to get through the rapids under the bridge - all the while grinding the bottom of my precious wood boat on the rocky bottom. I finally got through, sweating my ass off and the current settled into something I could easily overcome. Then the bottom kept on shoaling up. Not rocks but lots of weed that slowed me down some.

Getting near the turn onto the Indian Head River I got a little bit turned around and ended up floating in one of those dead end cul de sacs until I realized that the river was behind me. Remember- all this is happening in the dark. I went to refer to my trusty GPS to point the way. Note to self: replace batteries in GPS before trip. Dug around in my deck bag looking for the replacement batteries I am sure I threw in there earlier. Second note to self: make sure you actually throw the batteries into the deck bag. Scavenged batteries out of one of the flashlights. No good, not enough juice. Finally I decide I know the turn is just ahead, so just forge onwards without the benefits of modern technology. Hell, the Indians did it, so can I.

Turned the corner and scared up two geese resting on the river bank. In turn, they scared the crap out of me. Just as my heart is recovering, a bass gets scared out of the reeds on the bank and does a kamikaze run on the kayak. He actually rammed the boat trying to get away. Then, thankfully, I find the entrance to the Indian Head River.

Everything goes smoothly for about 5 minutes until the weeds in the middle of the river make it almost impossible to discern what's river and what blind leads to no where. When I finally think I've got it all licked, I run out of water. Hard aground. I shine my headlight around to see what's about. Two beady eyes light up in the reeds then scamper away. I figure raccoon. Then I hear a coyote bay not to far away. Now I'm thinking I may have some issues. Then some bird starts making wacky noises in the reeds on the other side. I'm feeling like Jim in those Mutual of Omaha Wild Kingdom shows. You know - the guy that was always down with the wild animals while Marlon Perkins rode safely above in the helicopter. Great. News headline: "Man found eaten in beached kayak - investigation into why he thought it was a good idea to paddle up a river he doesn't know in the dark to follow."

Anyway, although the current is flowing briskly against me, the tide is rising. While aground, I get out of the boat and get the batteries out of the rear hatch. Without my weight in the boat, it now floats... away from me. I have to grab the boat before it gets swept down stream into a particularly nasty stump sticking out of the water. Boat in hand, GPS now functioning, I get back in and low and behold there's enough water to get over the shallow spot I was stuck on. I get over this skinny stretch and back into the "deep" (like really I'm poling, not paddling since I hit bottom on every stroke) water. GPS now shows me 100 feet from the goddamned pull out. It's 9:00. I'm tired. I'm dirty. I'm fed up. I'm aground once more. Looking ahead there's a wall of rocks that won't go under for hours. I figure the only way I'm getting home is to walk it. So I get out of the boat (which will now float) and tow her in. Unfortunately, I don't see one of the big rocks that the current has spun the boat into, so she has a nice long, deep scratch up her side. But finally, I win the landing and celebrate my efforts with a big gulp of cold coffee from my cup that has some peculiar weedy thing. A fitting end to an ill conceived adventure.