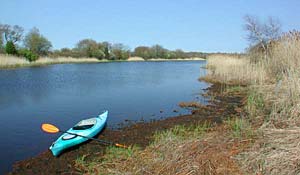 It was a gorgeous spring day with temperatures near 80 degrees. After so much crummy weekend weather and another one being forecasted, Sue told me that I should take the afternoon off and go kayaking. And being the dutiful husband that I am...

There seems to be some confusion about what the name of this water is. I suspect that the most accurate name would be the Green Harbor River, and some of the tributaries coming off of it have their own names - Bass Creek, Wharf Creek, etc. I guess I'll go with Green Harbor River.

I didn't know of any decent launch sites, so I simply parked my car at Rt 139 where the water passes through some sort of dam under the road connecting it with Green Harbor. Getting to the water wasn't exactly convenient. I had to slowly slide it down this hellish 45-degree concrete embankment. There goes about $50 off my boat's resale value. It wasn't any fun, but it was a picnic compared to what it would be like getting it back up to the car.

Once at the water, it wasn't too difficult getting launched. I hoped that I wouldn't get a ticket. I didn't see any no parking signs, but it probably wasn't something they'd like.

I paddled around the under-road dam and then headed up-river. There is an island near the beginning. I knew that the river forked, and I sort of thought this was it. A short distance up, I passed the first tributary on the left. I'd already made my decision to "bear right" on this trip, so I figured I'd hit that one on the way back. Turns out I'd really underestimated how long this ride would be.

There was a lot of open space on the left, and I was wondering what was up there. The edge of the river looked really mucky, and I didn't think I'd be able to land there, but once I got to the bank and tested the ground, it was actually quite solid. So I got out and walked around a little. Not really much to see. This is the Audubon wildlife sanctuary - mostly boring grasslands. Probably very exciting if you're wildlife.

Ultimately, I got to the main fork in this trip and headed to the right. I think this is Bass Creek. Nothing terribly exciting to see for the most part. It got windy from time to time, but since it was warm and still in mandatory PFD season, the wind was helping to keep me cool and I welcomed it. Much of this area was quite shallow. Perhaps there were deeper channels if I'd spent the time to look around, but I kept primarily to the center, and my paddles were hitting mud on almost every stroke. I'd say it was about 18" deep.

The tributary ended fairly abruptly. I'm pretty sure that it was wide enough for any sized kayak to turn at this point. I stopped, had a drink and rested. The thing about paddling alone is that when there's no one to talk to, you've got nothing else to do but paddle, and I was wearing myself out.

I headed back and then up the other primary tributary from that fork. This turned out to be the more interesting leg of the journey. Much of the wooded area on the right had this creepy Hansel & Gretel feel to it. And lots of birds! I wish the Audubon people would do something about that. All their racket really spoils it for the rest of us.

I went around a bend and there was this rather cool footbridge spanning the creek. For my money, there's nothing more interesting on a kayak trip than paddling under a bridge. So you can imagine how excited I was when I went around another bend and there was yet another footbridge. I made a mental note to tell Sue about this place. She's always looking for interesting locations to walk.

Soon after this second bridge (and I'm talkin' real soon - like 30 feet), the water became too shallow to paddle and I had to turn around and head back. Along the way, I saw the top of a rock sticking out of the water that I hadn't seen on the way over and figured that the tide must be going out and the water level dropping. But as I started to get near it, it moved! Wait a second... That's no spaceship - it's a turtle!! Unfortunately, by the time I'd realized what it was, I was already cruising past it and couldn't get my camera out in time. But I got a good look at it before it submerged - the shell was easily 18" long. It wasn't a snapper.

I then passed the last tributary that I'd planned on exploring, but it was 5:30 and time I started heading home for supper, so I left it for another day. Just before I got back to my launch point, I passed under some electrical wires. There were a couple of black cormorants perched on one of the wires. I gave them a wide berth, because I know what their plans are. Perhaps because of their size, it was kind of funny watching them. They were constantly fighting to keep their balance on the wire - much like we'd do if we were standing on a narrow beam.

I finally got back to the car and had to pull my boat back up the concrete slope. What a pain, and with tired arms. I've since heard that there might be an easier launch point around the corner at Peter Igo park, complete with parking. I'll have to check that out.

All in all, a pleasant ride - nothing that'll make National Geographic, but handy to me. And if this Peter Igo Park launch point exists, I'll probably be back many times.

Update - 5/17/05: Ned Bangs, an aficionado of both kayaking and Peter Igo Park, sent this to me in an email:

"There is no longer good launching at Peter Igo Park. We had a nice trail cut to the water, however it turned into an even better place to party. We let the trail grow in and the party has moved on. Most people drop their boat over the dike, that seems to work."