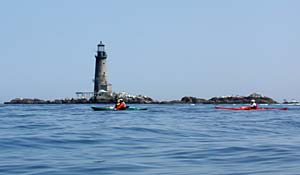 What a day! I arrived about a half hour early. I had gotten packed and had breakfast and was jumping out of my skin. So I left to check out the area. Jordan soon arrived so I knew I was in the right place. Ron was next then Pat and Nelson. As we were unloading Roy drove up. That was our crew for the day. A motley crew for sure.

This was my first launch from Windmill Point. Two things struck me. First, the gut was a lot smaller than I imagined, which is why it causes problems I am sure. The second revelation was the proximity of Peddocks Island. The maps don't do it justice. We were launching with the outgoing tide at 10:00am. Low tide was at 2:18. We all loaded up the boats and headed towards the gut.

We rafted up at the opening of the gut and noticed Ron was not with us so we waited. While floating there waiting for Ron, I could feel the current pulling me out. Very strong. Ron caught up and we headed out. The gut wasn't bad on the way out. Choppy but with limited boat traffic. We rafted up again at the edge of the channel and headed over the Lovell's Island. We landed at Lovell's and decided to do some poking around. 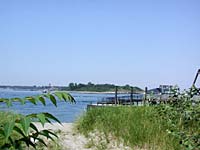 I popped a couple of Motrin hoping the stop the oncoming headache I was feeling. I am glad I recently updated my first aid kit. My headache was gone before we reached our next stop. Ron and Nelson did some extended exploration on the other side of the island and took some pictures. I want to come back here and spend more time walking around. We chatted for a few minutes on the beach and plotted our next stop. Calf Island.

The ride over to calf was pretty uneventful. We ran into a couple of kids fishing from their SOTs. As we approached Calf, we could see a boat moored just off the beach and what looked like a campsite set up above the waterline. We invaded 2 couples and young kid who were enjoying the sun. Apparently, they spent the night. They had all the necessary supplies. 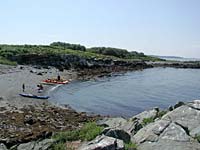 Cooler, Generator, Umbrella, tent and a couple of beach chairs. We exchanged pleasantries, had a snack and were on our way. Just a quick stretch before we head out to the Graves.

We began to see more textured water once we got around Calf Island. The wind picked up a bit and there was increased boat traffic in the area. We had the tide in our favor so it was still a pretty easy paddle. We were hoping for a little action and this was a good start. We reached the Graves.

At one time this was a long term goal of mine. It's amazing how far we have come in 2 years. It was nice to finally get out there. It looks so much more daunting on a map. The great weather, water conditions, research and planning helped to keep it an uneventful day on the water. Thanks to Jordan and Nelson for their input in planning the trip and guiding help throughout the day. 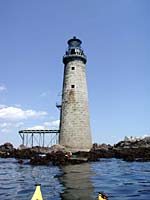 Pat, Ron and Roy found a place to land and decided to climb to the catwalk and checkout the Lighthouse up close. Jordan, Nelson and I stayed in our boats and paddled around. While floating around, I was checking out my gps. I noticed the large number of shipwrecks in the area. I assume most were before the lighthouse was erected. This would also explain the divers flags in the area. Once everyone was back in their boats, we grouped up and decided to hit the Outer Brewster Island for a lunch break.

The paddle over the Outer Brewster was more challenging than we had all day. We had to stop on the way over to allow a ferry to pass by. This thing was moving at a good clip and we knew we would get some nice wake to play in. We were not disappointed. The ferry gave a short but sweet ride. We landed on the rocky, slippery beach at Outer Brewster. There was a couple there who came over from Hull in their Aquaterra SeaLions. Apparently, it's a regular stop for them. They were gracious enough to share their spot with us. We were all pretty hungry by this point so we sat, ate lunch and talked about jobs/careers that take away from paddling time. No pizza joint for Pat. 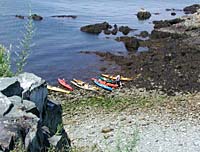 Given the time and later commitments a few of us had, we decided to skip the Georges Island leg of the trip and head for Boston Light. We left Outer Brewster and paddled between it and Middle Brewster on the way to Boston Light. The tide was very low at this point and there was almost a full bridge from Great Brewster over to Boston Light. We navigated around some partially submerged Rocks over to the landing spot. Nelson and Roy went around the other side of the Island. As we landed, the caretaker came over dressed in period clothing (not sure which period) and let us know that a boat tour was coming and her husband was waiting for us at the lighthouse for a quick tour. I wasn't aware that we wanted one. I guess Nelson and Roy must have phoned ahead from the other side of the island. Anyway, we met the tour guide just as a group was leaving the lighthouse. He gave us a brief overview and brought us up to the light. 73 spiral steps. I for one was not totally ready for that. It took me half of Sunday to realize why my thighs were sore. It was a very impressive set up they have to make the most of limited light. The boat tour had arrived so we had to leave the lighthouse. As we were making our way back to our boats another tour guide told us that a nice couple had saved our boats from floating away. 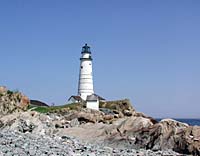 I guess that tide was coming in faster than we had thought or we spent more time climbing the stairs than we thought. We thanked them and admired their tandem Folbot folding kayak. Impressive looking boat. Soon after we launched an older woman came around the bend. She had just come back from the Graves. I was impressed given her age that she paddled out there alone. She had a speedy Epic kayak to help her along.

The final leg provided some fun boat wake and chop. We rafted up to cross the channel and were on our way home. We grouped up one more time to enter the gut. It was a lot more challenging this time with much more boat traffic. Very confused seas. We needed to really pay attention to what was going on. I almost went over when I planted my paddle in a trough and there was no water there. About halfway through a fishing boat came cruising by and kicked up 3 foot wave. We rode the wave out of the gut and headed over the beach. Roy left quickly and I had to leave also. I said my goodbyes and thanks for a wonderful. Missing the PPR does take away from the experience a bit. Life does get in the way sometimes.

Thanks everyone for another great day on the water.