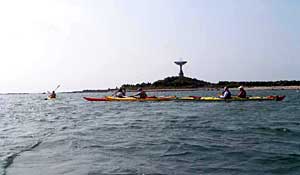 Padanaram to Mishaum to Slocum's Neck
September 8, 2007
By Jordan Jacobs

It started out in typical fashion, Ron and Mike carpooling were early, every one else filtered in right on time, and John even with a late start managed to catch up to us within a mile or so. Yes we used the VHF's too, on the proper channels too. 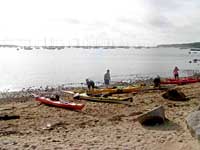 The day was advertised to have lots of wind 15-25, and lots of texture too, 2-4 foot. Launching out of Padanaram Harbor just south of the bridge was scenic and relatively calm. We paddled by some beautiful homes with some awesome waterfronts, of particular interest was a former Colonel's Mansion that was enormous, made of huge stone blocks. My buddy Russ informed me that the mansion was converted to condos. Right next to this amazing property by "Round Hill Point" was a retired satellite defense tower which is now probably providing some great satellite TV to the owner. Hopefully some of the group had cameras can post some of the great photos of the area.

Along the way my buddy Russ who I had breakfast with before we put in came out with his Jet Ski to us nut going out. He even went back to confirm John was on the water and making his way up to us at the point. 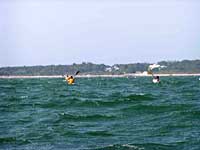 Point revealed what kind of a day we were going to have. We had a very aggressive paddle directly into the wind and rolling seas, going out but would have the reverse on the return trip. We all hung out at the point holding position into the wind and surf. We polled everyone to make sure everyone was comfortable paddling in these conditions. Each person was good to go, and off we went. The short distance to Mishaum Point seemed like a bit of test, and I'd scale the difficulty to about 60% of the difficulty paddling in the 30+ knot winds in Plum Island a few weeks ago. Although it was slow going everyone did fine. 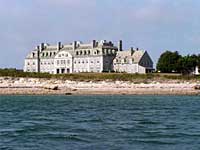 Once we got to the point we ducked in to dock area by the house at the furthest part (absolutely spectacular) for a breather. I've seen this house many times from the mouth of the Slocum but never made it over; it was great to get an up close view.

Continuing from here was going to change things a bit as the wind and waves would now be quartering. At the point there was some impressive waves forming with some breaking, they were anywhere from 3-5 feet (maybe a couple slightly larger).

We regrouped and suggested we stay out of the shallows and make our way across towards the red buoy as a visual navigation aid. I think each person became acutely focused on the water conditions and the group started to disperse as the beam seas we testing some edging and bracing skills. Ultimately after some fun paddling, and some maneuvering around the shallow sandbars forming at dead low tide, we made to Slocum's Neck for lunch. 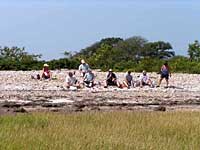 Everyone was still talking to me, which was a good thing. With the hard work done and the trip mileage half over, Mike was still smiling having paddled my Tempest for the day. I think his wife may not be speaking to me after pulling such a sales / demo job on Mike but like I always remind people, "you never want to be equipment limited".

Lunch on the shell and rock covered beach was brief, but well deserved, as the conditions from Round Hill to here didn't permit a lot of open cock pit access and watering opportunities.

The ride back would prove to be either an expanded or new experience for most of us. We had some serious wind and significant beam and following seas to look forward to. First we would have quartering winds and seas leaving Slocum's neck until we turned NE from Mishaum. Everyone managed to paddle through with no problems, except for a few white knuckles. 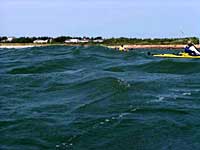 Rounding the point had some impressive surf breaking that looked a bit intimidating so we all stayed further out and cleared those. After we rounded we re-grouped at the same dock area just north of the point, and then started back to Round Hill Point. The following seas gave us all quite a ride, for some of us it was a real first taste of surfing. It tasted good too! On the way back we did have one rescue to make, with Ron being first on the scene. I heard Bea's whistle and assisted Ron with rescue, rafting up to gain some stability in the wind and waves. Chris got back into the boat in fine fashion and pumped out quickly too. The Hanson Skills Sessions have definitely paid off. I don't think I can emphasize enough how different practicing in flat water helps with the concept but practicing in actual conditions seals the lesson.

Chris took a detour to regroup back on shore, and I followed behind him, while the rest of the group paddled around Round Hill Point. Chris and I got back through the point after one more mishap, just 50 yards from glory....... Adding to this memorable turn back towards Padanaram were the gulls that circled over me, dumping all over me and my boat. Where's my 12 gauge pump when I needed it?! A few rolls later, my vessel and I were sparkling again. 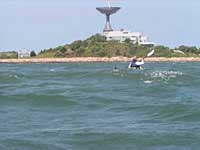 The ride back from Round Hill Point would be much calmer with quartering seas and less wind. We did have one fishing boat that was a complete bone head, neither giving us a break nor changing direction as he powered by us. We did everything we could to move out of his way, and at one point I actually think he altered direction to make the passing close. Too bad we didn't have a barge handy.

Back to the put in where we all unloaded our gear and re-loaded our boats. Our traditional PPR became PPIC (post paddle ice cream). After some floundering around we eventually found the local ice cream stand and the 9 of us sucked down some great cones, and a sundae.

Days like this just don't happen often enough in the paddling season. It was a great trip, with some really unique conditions that opened all our eyes and widened our grins too. Depending who's GPS you looked at the approximate trip distance was 15.9 miles. If you count the vertical that was experienced in the conditions, you could add another 20 LOL.

Thanks to all for a great day,