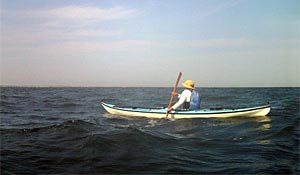 Close Calls at Vineyard Sound
May 30, 2008
By Noseykate


My continued unemployment status necessitated hydrotherapy. That is, I'd decided to spend Friday at Monomoy. Thursday evening at Cohasset, Mark pulled up and as he unloaded gear, he offhandedly suggested, "Want to paddle to Martha's Vineyard tomorrow?"

Okay, yes, there is a ferry that goes there. But I did that last week.

Mark lolling about on the Sound, unaware of narrowly escaping danger

We paddled out to the distinct line of current in the Sound and began flying west toward Woods Hole. No wind, sunny day, calm seas, we were wearing summer paddling clothing. Perfect day for this trip.

What Mark's stats don't mention is the ferry. The very one that had so quickly carried me to MV last week was now bearing down on us. Fast. This is a very intimidating sight. I did not think Mark recognized the importance of not being hit by the ferry - he was chatting and paddling along as though we were at Hingham. It was left to me to do the worrying about death by ferry. Fortunately I was able to shepherd us through the path of doom without letting on that we were in dire danger. The last thing I needed was a panicky paddler on my hands.


We flew down the coastline of the Elizabeth Islands. Mark occupied himself with tallies of times and distances. I enjoyed the wide-open view. We stayed well offshore to catch the best current. Ocean swell started rising under us, increasing as we paddled along. It became like a gentle rollercoaster ride. We lost sight of one another momentarily and then popped up again. Mark occupied himself tallying exact wave height and calling them out to me at intervals. "Two feet!" "THREE feet!" "That one was FOUR FEET!"

We stopped for lunch at the end of Naushon Island. It looked like the Caribbean - blue and green clear water, white sand, brilliant sun. Mark occupied himself with figuring out the exact ferry angle needed to cross to MV, using my LunaBar as a straightedge. "One hundred degrees!" We set out for the distant spot on the horizon. 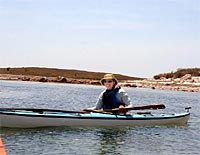 Leaving Our Beach on Pasque Island, Kate is ready for the "Big Crossing" to MV

Six miles is a long crossing. At first, the Elizabeths receded behind us quickly. Then there was the endless middle sector. The current had died to almost nil and we actually had to paddle ourselves forward. No one had told me I'd have to do any work on this trip. For a long time MV just hung there on the horizon, not getting any closer. I began to suspect that the tectonic plates were moving apart and I'd never reach the island. Mark was occupied timing our crossing and maintaining a compass course, little suspecting that we might never get there. Amazingly, after many hours or perhaps days, we arrived on a secluded sandy beach.

[Mark's stats] Landed at 2:15 Break until 3:30 when flood current was starting to get fast

Mark at Martha's Vineyard. It looked suspiciously like the beach we had just left. Perhaps we'd only gone in a circle?

We did the obvious thing: went swimming. There was another hour to pass before the current picked up again. And there were lots of stones to skip and roses to pick and sunbathing to do. It was a busy stop. Mark figured out a heading for the return crossing and as the current picked up just off the beach, we launched for the final leg of the trip.

[Mark's stats] Easterly wind waves opposing current set up some choppy beam seas for crossing back to mainland 6.5 miles to Nobska Point by 4:30 (6+ mph) Last 1.5 miles to put-in, landing at 4:50 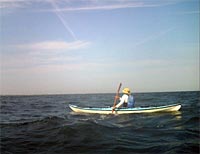 The Bumpy Ride Home - Crossing back to Falmouth

Crossing back to Woods Hole was not as easy as the rest of the trip had been. Even though the conditions were calm, when we hit the Middle Ground everything got bumpy and very fast. Although we were at a ferry angle to take us to the Nobska Lighthouse, we were traveling much more quickly sideways than across. The current was already cranking here. Mark as usual was occupied with tallying up time and distance, completely unaware that once again the ferry was bearing down on us, the current taking us out to the ocean, and our progress seemingly inadequate to take us to the shore. I did all the worrying for us both, thereby narrowly averting disaster while paddling at max capacity and appearing unconcerned.

We made it into the big eddy that forms behind Nobska Light and could slow down and breathe. Mark called out the total mileage: 26 miles! We both dreamed of ice cream and/or beer and made a final sprint for the takeout. Mark little suspected the dangers with which he'd had a close brush, and I had the satisfaction of knowing that once again I'd gotten him through a tough trip without him having to worry at all. Next time, though, I think I'll suggest he take the ferry....