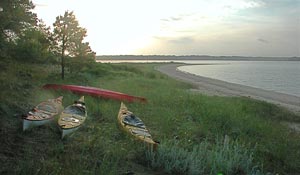 Photos by Ron and Norm


It all started, as most good things do, with a bunch of us sitting around drinking. In this particular case, it was at a mid-winter WTP gathering. Someone brought up the subject of camping at Washburn, and everyone was interested. The problem is that this isn't one of these things you can plan a few weeks ahead. Washburn Island campsites book up many months in advance. So within the next couple of days, I checked in on reserving campsites. It was January, and June weekends were already fully booked. But May 22nd was still pretty wide open. After doing a quick survey of interest, I grabbed sites #1 and #2. (For future planners, I think they're the pick of the litter.) 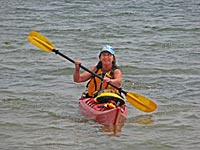 After a last-minute cancellation, we had a group of seven people. Chip, Ron, Bea, Norm, Mike (Finn), Joe (Dalerks) and myself. Chip, Ron, Mike and I carpooled down using Ron's ever-invaluable trailer, while Bea, Joe and Norm drove down solo. We unloaded and were in the water pretty much right on schedule.

No one was 100% sure of the plan to meet Norm. We knew he was getting there early, but we couldn't remember if he said he'd meet us at the launch or at the site. After a suitable amount of shrugging, we headed out - a group of low-riders.

It's only 2.5 miles to the site, but once we rounded the first corner, we were heading into an 80-knot wind. Ok, the battery on my wind meter was dead, so I'm approximating, but it was kind of a stiff breeze, and it only got worse once we turned the corner into Waquoit Bay. 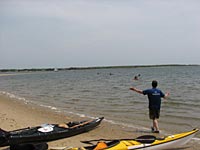 We rounded the last sandbar before the final approach to our campsites, and there were a group of native villagers in their customary tribal dress waiting to welcome us to their homeland! Oh, wait a minute... Those are just more Turkeys in PFDs and sprayskirts. Never mind. Jordan, Deb and Lora had joined Norm for an early paddle around the bay before we got there and gave our fully-loaded boats a pull up onto the beach as we arrived. After some chat and catching up, Jordan, Deb and Lora took off for parts unknown, and the rest of us began the ordeal of unpacking and setting up camp. 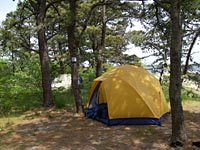 Erecting the tents was a bit of a challenge with the aforementioned breeze trying to convert our lightweight tents into para-sails. It was about here that I discovered that when I was at home, packing my gear into my kayak, my little dark green bag of tent stakes had fallen onto the dark green ground cover around my kayak. A call to Sue confirmed that they were indeed out there. This was of no help to me now, but what WAS of great help was that Mike had a handful of extra stakes, and I was able to get myself anchored securely.

Once set up, we headed down to the beach for a short rest. But after a short time, the call of the sea was more than we could bear. Or perhaps it was Bea's incessant nagging... "C'mon, let's go for a paddle!!!" At any rate, we were on the water again and headed for one of the inlets on the other side of the bay. Once there, we got a good look at a family of Ospreys in a nest. We paused there while the photographers captured the moment. Then we continued up about as far as we could go without disturbing a group of swans.

On the way back, we decided to head clockwise around the shore of the bay. It was at this point that Chip and I started getting seriously hungry. Nearly a mile away, beef stew was calling to us, and it sure had a purdy voice. So when Norm, Mike and Bea wanted to take a ride out through the inlet to the ocean side, the rest of us made a break for it and headed back to camp. 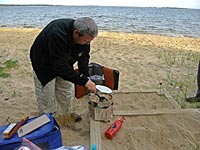 For reasons unknown to the meteorologically-challenged among us, the wind was quite a bit stronger up in the campsite then it was on the beach, right next to the water. So that was where we decided to set up the kitchen. Chip broke out all his cool camping cookware and got to work. And just as the stew was starting to steam, the ocean-going crew came sailing in.

I came up with the postulate that the quality of a meal is inversely proportional to the distance and accessibility to civilization, and the stew tasted mighty good. And to top it off, Joe's wife made us some terrific cookies for dessert. (Any of you other wives reading this???)

Once the pots, pans and bowls were cleaned up and put away, we re-assembled on the beach for the evening. Several of us were drinking beer or worse, completely aware of the rules prohibiting it. Yeah, we're just a bunch of outlaws. We'd been hoping that the wind would die down, but it was still blowing at a steady clip. But it wasn't terribly cold, and we had a good time. Norm was unable to wake his wife to get a Celtics' score. At 10:30, I decided to call it a night, and I think most everyone did the same soon after. 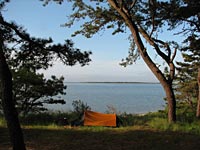 After not the greatest night's sleep, I woke to sunshine on the side of the tent, which was better than what the weatherfolk had promised. I turned on the GPS and it said it was 6:30. Well, by that time, some of the guys should be up and around, but I couldn't hear anything. I threw some clothes on and got up to see what was going on. Not much. So I grabbed my camera and went down to the beach to take a few shots of the sunrise.

The wind had died down and it was a beautiful morning for a paddle. It was also a beautiful morning to just sit on the beach and watch the day begin. I went with plan 'B'. Just me and this one lone no-see-um. And his one lone friend. And their one lone family, followed by... OMG!!! Back in the tent with the screen zipped up. It was almost 7:00 and no one was up yet? I turned on my phone to verify the time. 5:55? Sigh... So I re-configured the time on my GPS and lay back down on my bed till I heard voices.

Chip got the kitchen set up down on the beach again, and it wasn't long before everyone had their coffee and tea. Well, almost everyone. Chip got to work on the egg and Canadian bacon breakfast bagels. I find it remarkable that these miniscule toy-like things can be assembled into real stoves that provide real heat and are used to create really good meals. And with the help of Joe who was cooking bacon on his stove, we were eating in no time. Ultimately, Bea showed up, looking like someone unaccustomed to being up before the crack of noon. But with a cup of coffee, she was one happy camper.

With the meal dishes again washed, we began the task of packing up. The slightly less amount that you have to bring home with you is pretty evenly offset by the fact that you tend not to pack with the same vigor and efficiency that you had preparing for the trip. But we got everything back into the boats and we were ready to depart. 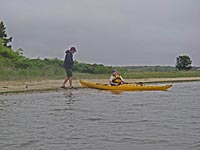 Up stomped the ranger looking mad as hell, wanting to chew us out. Well, that's not completely true. Up strolled the nicest guy you'd ever want to meet wanting me to sign a form and to make sure that we all had a great time. We spent some time chatting with him and got some interesting information. He told us that during the summer, if you find yourself wanting to camp there mid-week, it's worth a phone call to see if they have any empty sites, especially if the weather is anything short of spectacular. He said that as soon as the reservations open up in the winter, a lot of people simply grab a block of time, hoping that they'll be able to get down there when the time comes. So they often have empty sites sitting there.

He also said that once September 15 passes, they stop taking reservations, and you can just paddle down and camp for free. He also said in passing that the large group sites tend to be used by people for the keg parties, so I wasn't feeling like such a criminal for the few beers I drank the night before. He wished us well, and we were on our way. 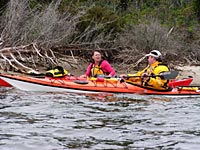 This time, we decided to take the long route home by way of a counter-clockwise circumnavigation of the bay. Although I was very comfortable in nothing but a tshirt on the first leg south, once we turned east, we were heading into a strong breeze (the morning calm was over, now), and it chilled me so that I had to stop and put on a jacket. However, once we finished the southern stretch and turned north, the wind dropped off completely, as did my jacket.

At this point the trip changed into a very laid-back relaxing paddle. Or, as Jordan would call it, "Hell." No one was in any hurry to get back to the car, so we took our time, chatting and watching the scenery go by. We rarely broke 2.5 mph. But even at that speed, we ultimately did get back to the launch site and packed our things. As we were loading our boats onto the cars, a powerboat owner, waiting for access to the ramp gave us several friendly and welcoming looks. Sorry, I don't have a "sarcasm" font for that last sentence... 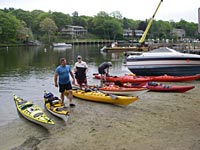 By time we were on the road again, it was past noon, and we were in serious need of food once again. Bea told us that she had a Norway trip to prepare for and had to head back home right away. Personally, I think she probably had another kayak trip later in the day, or maybe she was going mountain climbing or something. But the rest of us just wanted some cholesterol and carbs. We stopped at the 99 restaurant, where Joe put on an impressive performance of popcorn consumption. This worked out well, since the waiter kept bringing mass quantities of the stuff.

And with our stomachs full once again, we headed home to our showers and comfy couches.