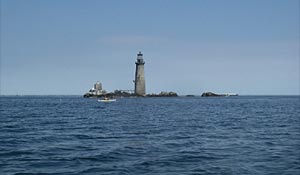 The Graves Lighthouse
May 1, 2010
By Norm Caseley

(This is an abridged version of the trip report. For the full report and many more photos, see Norm's forum post.)

The weather forecast was for nice calm winds on Saturday May 1st. I traded emails with Lora and Jordan early in the week. Found out Lora was busy Saturday but Jordan was ready to launch the new NDK Explorer for the first time. Jordan suggested that it would be a good chance to go out to The Graves Lighthouse if the weather forecast held true to what they were predicting 3-4 days in advance, so we posted the trip on Wednesday to see if anyone else was interested. Chip W. was the only one to respond but Johnysmoke showed up at launch time. We chose to meet at 10:00am because Jordan had an early PT appointment and would be done by 9:00.

I arrived early so I could take a ride around Hull. I'm always in a hurry to get to a game when I'm in this town, so I thought it would be a nice chance to cruise around and see the neighborhoods. The beach sidewalks near the carousel were filled with people walking, riding and just looking around. I pulled over and looked out at the two lighthouses we would be paddling past today and took a couple snapshots to test out the zoom and image stabilization on my camera. At this point, Boston Light was about 3.5 miles away and Graves Light was about 6 miles away. I'd be getting much better pictures later in the day. I did get one nice shot of Boston light from Point Allerton Avenue that showed how calm the water was at about 8:45.

When I arrived at Hull Gut, I drove right to the end to see if the water was calm there also, and it was. There were two kayakers out there taking their time cruising right in the middle of the channel with absolutely no boat traffic around. It was immediately obvious who the kayakers were because of the bright lime green color of one of the boats. It was Libby and Jan who we had just paddled with in Wellfleet last week. I watched them for a while as they headed out towards Georges Island. 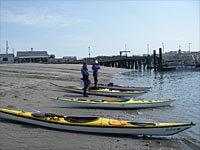 Jordan arrived and found me still out at the end of the road so I got back in my truck and moved to a better parking spot between the restaurant and the boathouse. Chip W arrived as we were parking and John pulled in a few seconds later. We helped each other unload the boats off our vehicles and geared up in dry suits for the trip. The air temperature was climbing and was probably about 60 degrees at launch time so we knew it was going to be hot in the suits. The marine weather forecasts mentioned that the water temps were still in the 40's, so we knew the suits were the right choice.

We launched and headed along the shore for a while but then pretty much angled across the channel straight out towards Boston Light as there was still almost no boat traffic. Jordan was out in the lead as usual but Chip W. was keeping up with him pretty well. Here they are stretching and waiting for John and I with Boston Light flashing in the background.

We headed to the west of Boston Light, still staying anywhere we wanted, right in the middle between the islands. No need to hug the shores to stay out of traffic this beautiful May morning. Here is a picture of Great Brewster Island behind Jordan and Chip, and Middle Brewster on the right.

A little beach on the north side of Outer Brewster. Didn't look too bad on the way out. As we approached the beach, all the birds that call it home complained loudly as they did not want us there. Most of the birds just moved to the small cliffs on either side of the beach and a few went out for a swim. 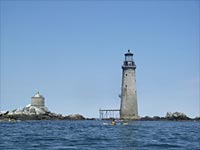 The beach was a lot rockier than I expected, but we all landed as softly as possible and then found driftwood to support the 2 delicate NDK Explorers.

We pulled out our snacks and had our lunch break.

The Common Eider Ducks and Canadian Geese swam around offshore while we used their beach. I think the rocks in the background are part of Green Island and the far off buildings are in Winthrop.

John, Chip W. and Jordan ready to get back in the water after lunch. Everybody launched safely but me - I made a stupid mistake trying to use a piece of driftwood to support the back of my boat while I got in and ended up tipping over and falling in. Oh well, that's why I'm wearing all this gear and packing all my electronics in dry bags, right? 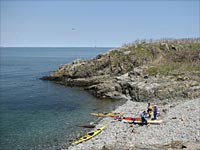 Below is a topo map showing the route we took. On the way back, it seemed that we were trying to cut straighter across the channel, but the wind and tide must have been pushing us along the same track that we took on the way out.

A few stats from the trip:

Jordan and I went to the new EMS store in the old Hingham Shipyard to check it out on our way home. The store seemed very nice, but didn't have anything we were looking for. Jordan picked up one little item. After scoping out EMS, we went to Panera Bread for PPR.

Thanks for suggesting The Graves Jordan. Perfect choice for the day.